Hypoxia is common in patients presenting to the ED and can be life-threatening. The differentials are wide and include cardiac, respiratory and haematological causes.

Methaemoglobinaemia accounts for only a small proportion of these cases and so the diagnosis is often delayed or missed. A thorough history, examination and analysis of investigations leads to the diagnosis. Early treatment can reverse methaemoglobinaemia within the hour, reducing subsequent morbidity and mortality. As such, it is essential for the ED physician to be familiar with the presentation and management of this uncommon but potentially reversible condition.

Methaemoglobinaemia is an uncommon but fully reversible cause of hypoxia – early diagnosis and treatment is essential.

Methaemoglobinaemia is a disorder characterised by a higher than normal level of methaemoglobin (MetHb) in the blood [1, 2].

In health, MetHb is < 1% (of total haemoglobin) 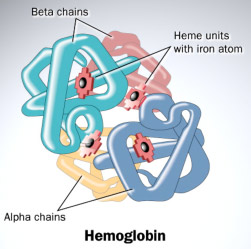 The structure of haemoglobin is adapted to it’s function. Haemoglobin is a tetramer of four proteins (globins) each of which carry a haem group. Haem consists of an iron molecule held in a porphyrin ring structure. It is the iron molecule which binds oxygen, thus each haemoglobin molecule has the capacity to carry four oxygen molecules. In addition the binding of one oxygen molecule causes a structural or conformational change in the haemoglobin molecule which increases the affinity of the remaining haem units for oxygen. This cooperativity gives rise to the classical sigmoid-shaped oxygen-dissociation curve. 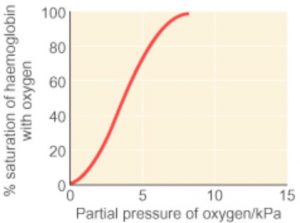 The majority of iron in haem is in the form of Fe2+ (ferrous ion); this functional form can bind oxygen. Fe2+ can be oxidised to Fe3+ (ferric ion); Fe3+ is non-functional and cannot bind oxygen. Haemoglobin containing Fe3+ is called Methaemoglobin (MetHb).

Furthermore the presence of Fe3+ alters the structure of the whole haemoglobin molecule to increase the affinity of the remaining Fe2+ ions for oxygen (i.e. a left shift of the oxygen-dissociation curve). 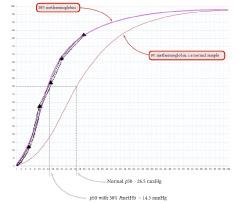 Therefore the presence of Fe3+ has a dual impact on oxygen carriage haemoglobin can carry less oxygen AND oxygen release at the tissues is impaired – causing a more profound tissue hypoxia than indicated by the SaO2.

Red blood cells are continuously exposed to oxidative stresses which convert haemoglobin to MetHb. In health, levels of MetHb are maintained at < 1% by a host of protective reduction pathways that restore Fe3+ to Fe 2+.

Foremost of these is the cytochrome-b5-reductase (also called NADH-methaemoglobin-reductase) pathway. This pathway is responsible for 99% of MetHb reduction under normal conditions.

Other minor pathways involve other reducing agents including NADPH-methaemoglobin-reductase (which requires functioning G6PD), ascorbic acid and glutathione. These minor pathways offer options for the treatment of methaemoglobinaemia, as will be discussed later.

When the physiological balance of iron oxidation and reduction is upset, either by an increase in oxidative stresses (causing increased MetHb production) or by ineffective reduction (causing reduced clearance of MetHb), methaemoglobinaemia results and oxygen delivery falls.

Hb can be oxidised to MetHb. MetHb does not carry oxygen efficiently. In health, protective enzymes reverse Hb oxidation to keep MetHb levels at < 1%. The major enzyme involved is cytochrome-b5-reductase. When these protective mechanisms fail, MetHb levels rise and hypoxia results.

Methaemoglobinaemia can be innate (e.g. a genetic deficiency of enzymes involved in reduction pathways or altered haemoglobin structure) or acquired (e.g. exposure to toxins that increase oxidation reactions). Some cases are idiopathic [1].

In adults or older children with no previous history of methaemoglobinaemia, the most common cause is exposure to a toxin. The toxins may act directly as oxidising agents or indirectly by producing oxygen and peroxide free radicals which in turn oxidise Fe2+. The effect is variable depending on dose, timing of exposure and variability in metabolism between individuals.

The list of causative toxins reported in the literature is exhaustive but of note are local anaesthetics, nitrites (including alkyl or amyl nitrites or poppers), Metoclopramide and antibiotics including Dapsone [1, 2].

Table 2: Some of the commoner toxins associated with methaemoglobinaemia

The most common cause of methaemoglobinaemia is toxin exposure taking a thorough history is essential. In young children, congenital causes should also be considered

The patient presents with.

Methaemoglobinaemia can be asymptomatic or cause a range of hypoxic symptoms.

Cyanosis is usually the first sign and patients can initially appear very well for the level of cyanosis. This is because cyanosis secondary to methaemoglobinaemia appears at 1.5 g/dL of MetHb, whereas cyanosis secondary to hypoxaemia appears at 5 g/dL of deoxygenated haemoglobin, which represents a much greater reduction in oxygen carrying capacity. 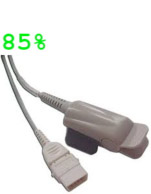 In any patient who presents with cyanosis or low SpO2 out of keeping with their clinical state, and which does not improve with supplemental oxygen, think methaemoglobinaemia.

Initial assessment should follow an ABCDE approach as for every hypoxic patient, supporting ventilation and circulation and identifying and treating other causes of cyanosis or other effects of toxin exposure. Anaesthetics or ITU input may be required.

If methaemoglobinaemia is suspected there are key points of the history and examination that should be elicited to aid diagnosis, identify cause and allow assessment of severity. 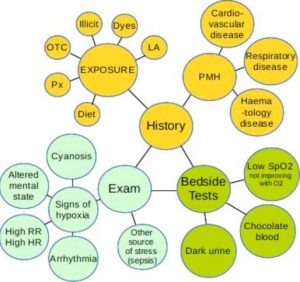 The most important part of the history is to elicit any history of exposure to account for the methaemoglobinaemia. It is also necessary to identify co-morbidities and any history of cyanosis or haematological abnormality.

Examination should look for evidence of compromise (i.e. signs of hypoxia) and any clues as to the cause including presence of sepsis

1) Chocolate Blood: In methaemoglobinaemia, blood is chocolate coloured and it does not oxidise or turn redder on exposure to air 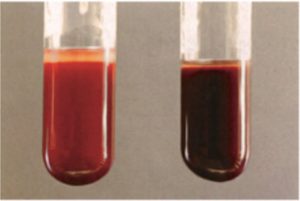 3) A low SpO2 on pulse oximetry which does not improve with supplemental oxygen. SpO2 as measured by pulse oximetry usually does not fall lower than 85%, so significantly lower readings suggest an alternative or additional cause of hypoxia.

MetHb: The gold standard investigation is a MetHb level which may be available as standard on ABG co-oximetry or may have to be specifically requested.

ABG: normal PaO2 (or may be raised if on high levels of supplemental oxygen)

allows calculation of the Saturation Gap

* some older ABG machines calculate SaO2 from SpO2, pH and bicarbonate. These machines give a falsely high reading for SaO2 as they assume Hb is normal. Most modern ABG machines are combined with a co-oximeter which measures light absorption at four (or more) wavelengths and allows direct measurements of COHb (600nm) and MetHb (631nm). Thus they give an accurate SaO2 and MetHb.

ECG: Rule out differentials or contributory causes. MetHb can cause arrhythmias secondary to hypoxia. Toxin exposure can also cause conduction disturbances.

CXR: Rule out differentials or contributory causes to hypoxia

bHCG: Pregnancy has implications for treatment thresholds and the need for full discussion of risks and benefits to gain informed consent

Get an ABG early for accurate SaO2 and MetHb level.

Low risk patients can be treated with supportive care and observation whilst high risk patients require active treatment to reverse the methaemoglobinaemia [5].

Traditionally active treatment is only indicated if:

Some authors challenge this threshold as MetHb is not the only indicator of disease severity [6]. Significant variation exists between individuals and additional factors should be considered when stratifying risk:

3) Hb level. Anaemic patients will be symptomatic at a lower concentration of MetHb.

If there are any concerns about treatment, contact the National Poisons Information Service.

A guide to treatment is as follows: 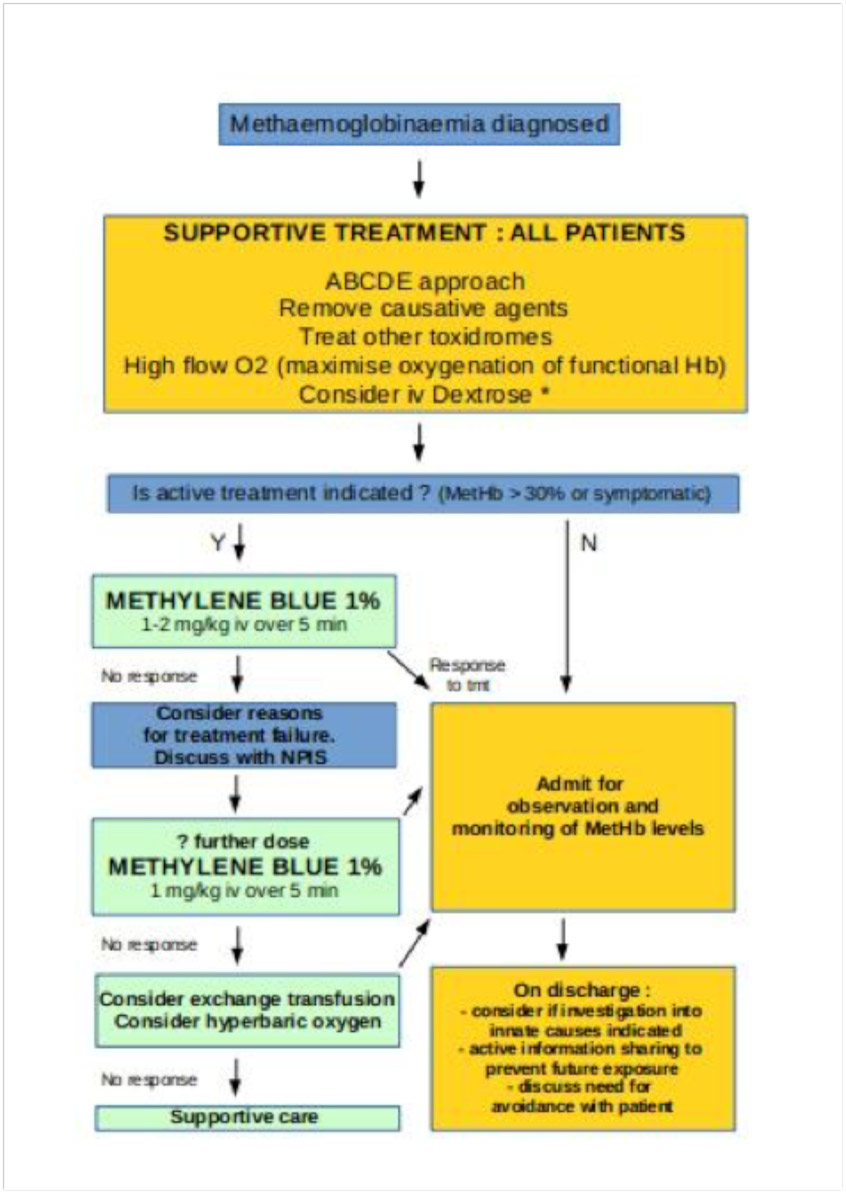 * Dextrose there is no trial evidence per say for the use of intravenous Dextrose but its use is well described and biologically sound; both NADH and NADPH are produced by the metabolism of glucose [1].

Other therapeutic options including high dose ascorbic acid, cytochrome P450 inhibitors, and N-acetylcysteine have been proposed but there is as yet insufficient robust evidence to recommend their use [7, 8].

Methylene Blue is an aromatic dye found in the antidote cupboard of the ED.

Action: Acts as a co-factor in a MetHb reducing reaction. NADPH-methaemoglobin-reductase reduces Methylene Blue to Leukomethylene blue, which in turn reduces Fe3+ to Fe2+. Thus this pathway, which only plays a minor role in health, can be exploited to become the main therapeutic target in methaemoglobinaemia. 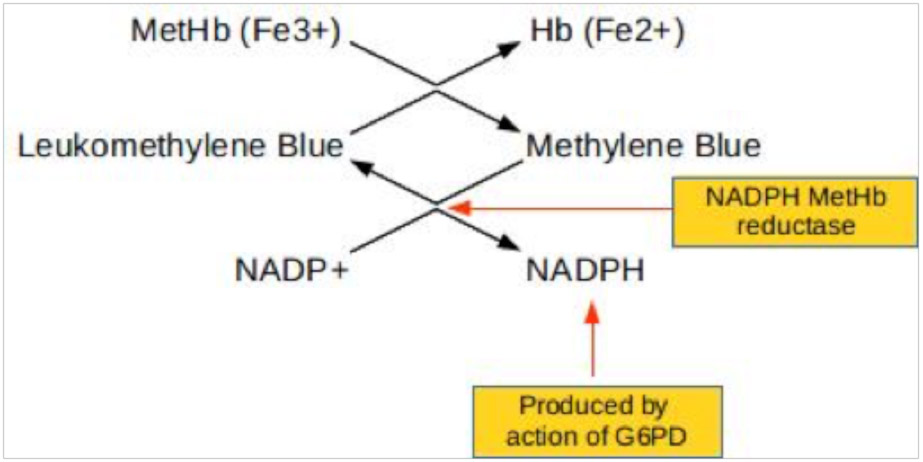 Response: Effects should be seen quickly with a dramatic reduction in MetHb in < 30 minutes.

If required further doses of 1mg/kg can be given after 30 minutes (to a maximum of 7mg/kg).

Monitoring: Methylene Blue interferes with pulse oximetry so SpO2 will appear to fall with treatment (and can go as low as 65%). Monitoring is by co-oximeter measurement of MetHb and SaO2.

Caveats and cautions to consider :

Sulfhaemoglobinaemia: MetHb can be been further modified by binding irreversibly to sulphur to form Sulfhaemoglobin (SulfHb). This happens with exposure to certain toxins, notable examples being Sulfasalazine and Sumatriptan. Clinically the presentation is similar. Patients may have a green tinge to their blood on venepuncture. There is no specific treatment. Sulfhaemoglobinaemia does not respond to Methylene Blue

Pregnancy: Very limited data exists but the general consensus is that the risks of treatment with Methylene Blue are less than withholding treatment if it is clinically indicated. Women should be counselled about the risks and benefits and have fetal monitoring throughout.

The differential of cyanosis in children is huge and includes cardiac, circulatory, respiratory and haematological disease, which need to be identified and treated as appropriate.

Infants are a special case in methaemoglobinaemia because innate causes usually present early in life. That does not mean that environmental exposure can be forgotten. A careful history is required. Young children are at higher risk of developing acquired methaemoglobinaemia after an exposure as:

Suggested approach to the evaluation of cyanosis in neonates and infants 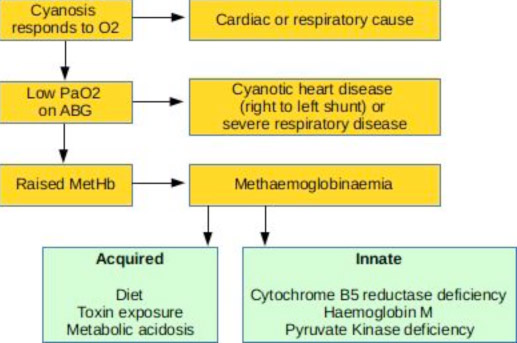 1) The diagnosis of methaemoglobinaemia is often delayed. Top tips that should make you think MetHb:

2) The agent which has caused methaemoglobinaemia may also have other toxic effects which require specific treatment. Consult Toxbase or the NPIS for further advice

3) Consider the whole patient (presentation, co-morbidities, extent of exposure) not just their MetHb level when deciding on active treatment