Almost a century ago the French neurologists Guillain and Barre described the cases of two soldiers with acute paralysis and areflexia who later recovered [1], and gave their name to Guillain-Barre syndrome (GBS). The disease affects adults and children of any age, although it is rare in those under the age of 2. The incidence of the disease in children in Europe and the USA is 0.4 1.3 cases per 100 000 [2].

GBS is now thought to be a group of phenotypically similar disorders. Degeneration of the axon can occur as well as demyelination of the nerve sheath [3].

The Miller Fisher syndrome is most commonly seen in the Far East. It has the cardinal feature of ophthalmoplegia, which is often part of a triad completed by ataxia and areflexia. Patients may also have ptosis, facial or bulbar palsy, along with mild limb weakness [5].

Diagnostic features of GBS are summarised in Fig 1 [4,6]. The frequency of presenting symptoms is shown in Table 1 [1]. 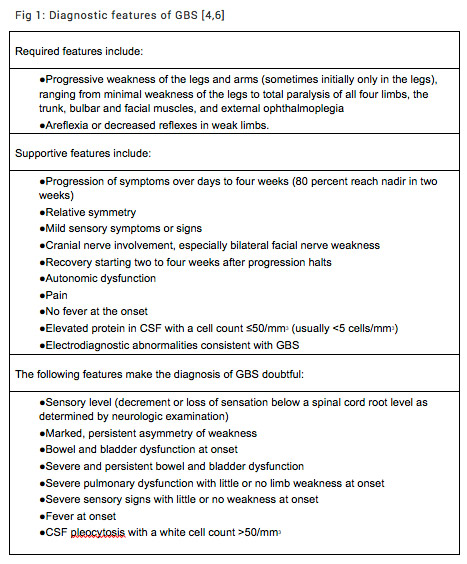 GBS is characterised by a rapidly progressive bilateral weakness, accompanied by reduced or absent tendon reflexes. The symptoms and signs of GBS typically but not invariably move proximally.

Early symptoms include pain, numbness, weakness or paraesthesia in the limbs, followed by a rapidly progressive symmetrical bilateral weakness. This may extend to respiratory muscles or those innervated by cranial nerves. Whilst the typical pattern of ascending weakness is well described, symptoms and signs may affect arms and / or legs, and may take on a variety of patterns. There are generally decreased or absent tendon reflexes in affected limbs. Note that pain is a common symptom in GBS and can be severe and resistant to treatment.

Autonomic failure can lead to cardiac arrhythmias and blood pressure fluctuations. Although normally of little significance, these can occasionally be life-threatening [8-19].

The most common presentation is a post infectious disorder (Campylobacter Diarrhoea most typically) in an otherwise healthy patient. Approximately two thirds of adults report symptoms of an infection (gastrointestinal or upper respiratory) in the preceding 3 weeks (see Fig 2). There is weaker evidence to support a post vaccination etiology [8,11].

Other associated infections include HIV[19] and Zika virus[20].

A largely arbitrary distinction is made between mild and severe GBS on the basis of whether the patient is able to walk. The more severe the weakness, the worse the prognosis, and if respiratory muscles are affected then ICU treatment may be required. GBS is a progressive disease and all patients, whatever the severity, should be referred for in-patient specialist assessment and treatment. In children the severity of the illness usually peaks at 2 weeks after onset [11].

Any child in whom GBS is suspected must be admitted as progression of the disease can be rapid and life-threatening.

In countries where poliomyelitis has been eradicated, GBS remains the most common cause of acquired paralysis in children. For a classical presentation, making the diagnosis is relatively simple. However, presentation may be subtle and includes minor changes of gait or refusal to walk, associated with pain.

The emergency physician needs to keep GBS in the differential diagnosis of the limping child.

A comprehensive list of differential diagnoses which may mimic the neurological presentation of GBS is presented in Fig 4 [4]. 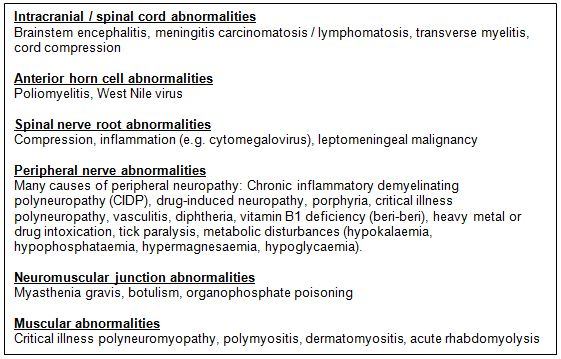 The diagnosis of GBS is largely clinical, but the standard investigations are listed in Fig 5. The key diagnostic tests in the ED are a lumbar puncture, along with a screen of blood tests. Lung function tests are vital for safe management of the patient. Electromyography and MRI may be of use but are rarely available to the emergency physician [11].

A raised CSF protein level (>0.4 g/L), with normal CSF WCC is strongly indicative of GBS. However, CSF protein may be normal in the first week of the disease, but will be increased in more than 90% by the end of the second week [12]. Other raised markers in CSF may include haptoglobin and 1-antitrypsin amongst others, but it is unclear if these are pathogenic [13].

A raised protein level with normal white cell count is the typical CSF finding in GBS.

A raised CK in the blood would suggest an alternative diagnosis such as a myositis. Hypokalaemia and hypoglycaemia may also mimic GBS symptoms and should be excluded. Liver function tests are often mildly elevated in GBS.

Serial lung function tests are important as the onset of respiratory compromise can be rapid. Patients with an FVC less than 20 mL/kg are candidates for prophylactic intubation and mechanical ventilation [4].

There is much current work regarding immunological studies in GBS these may confirm an immune pathogenesis, and may affect long term treatment in some cases, but currently have little place in the acute diagnosis or treatment of GBS [14].

b – Regular monitoring of lung function to identify need for respiratory support and Intensive care management. Succinylcholine should be avoided if intubation is needed.

2 – Corticosteroids have no role in treatment of GBS.

3 – Intravenous immunoglobulins (IVIG) and Plasma exchange have been found to have similar efficacy in accelerating recovery. Combining them is of no benefit.

4 – IVIG is the treatment of choice for children due to lack of studies and practical difficulties with plasma exchange.

In section specific treatments, in the first point: change 2 weeks to 4 weeks in both places 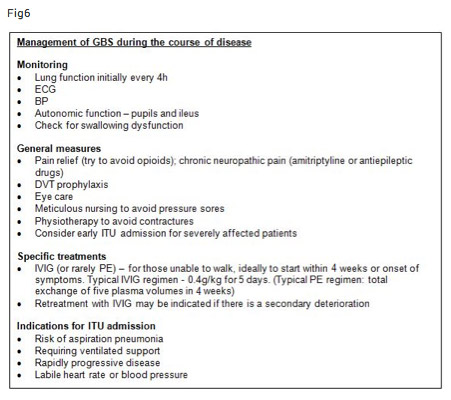 Regular monitoring of lung function is essential to identify patients who will require respiratory support.

A Cochrane review of adult evidence shows equal benefit of plasma exchange (PE) and IVIG, and this has been extrapolated to children in the absence of strong studies. Due to the practical difficulties of PE, IVIG is the treatment of choice for children. The use of IVIG is thought to shorten the duration of symptoms but have little effect on overall recovery [7,11].

No benefit has been demonstrated in the use of oral corticosteroids. Trials of intravenous corticosteroids have shown some benefit but this has not reached statistical significance [10,15,16].

Although there is some evidence that treatment with PE may be beneficial, there are no adequate trials to support the use of IVIG or PE in GBS patients who retain the ability to walk [17].

The final outcome of MFS is generally good. There are no randomised controlled trials of IVIG or PE usage, and what trials there are show little benefit [18].

In contrast with adults, the prognosis in children is usually excellent with most children making a good recovery [7].