Coma is a common presentation to the Emergency Department. However there are many different causes of coma and it is essential that the ED physician is able to quickly and reliably differentiate between the major differential diagnoses.

This article will review the following aspects of the patient in coma:-

The word coma is derived from the Greek k ma meaning deep sleep. Various definitions exist. The Merriam-Webster dictionary defines it as a state of profound unconsciousness caused by disease, injury, or poison The key point common to all definitions is that coma is a state of unconsciousness in which the patient is unable to react to people, or events within their environment. Patients can have different levels of unconsciousness and unresponsiveness depending upon how much or how little of the brain is functioning and the intensity of the stimulus.

It is important to note that there is no single examination finding, score or test that distinguishes between all patients in coma and those who are not.

For both cerebral hemispheres to fail requires

Initial assessment of the patient should focus on ensuring the patient is neither hypoxic nor hypotensive, both situations can cause coma. Where coma is due to other causes both hypoxia and hypotension can worsen the outcome.

Hypoxia and Hypotension must be identified and treated in all patients in coma. Failure to do so increases morbidity and mortality

General examination should focus on the function of specific organs and stigmata of certain toxic causes of coma Fig. 1

Following the general examination of the patient attention can be directed at the detailed neurological assessment.
The depth of coma is most reliably determined using the Glasgow Coma Score (GCS). This is the most valid measure of coma (Table 1)
Patients in the deepest level of coma:

Patient with a GCS of less than 10 who are not expected to recover quickly should be assessed with a view to intubation to protect the airway and optimise respiratory function. Patients who are likely to recover quickly e.g post ictal patients do not ordinarily require intubation. 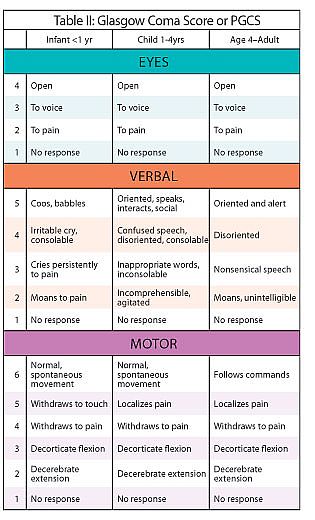 It should be noted that the Glasgow Coma Score is not of itself a prognostic tool.
At the same time as the GCS is determined it is essential that the pupillary responses to light are recorded as well ocular abnormalities and any posturing of the limbs. In cases where head injury is not suspected the presence or absence of neck stiffness should be determined.

In patients with head injury the priority is to maintain adequate cerebral perfusion pressures and cerebral oxygenation. Hypotension and hypoxia, which may arise as a result of injuries other than to the head must be aggressively treated. Thereafter the patient should undergo CT scanning without delay, in order to assess whether there is a neuro-surgically remediable cause such as an extradural haematoma.

Hypoglycaemia is a reversible cause of coma. Prompt recognition and treatment reduces morbidity and mortality

The differential diagnosis for such patients is meningitis or cerebral malaria. The priority is to commence antibiotic therapy appropriate for acute meningitis whilst undertaking appropriate tests for malaria (in patients who could conceivably have contracted the condition) and arrange urgent CNS imaging.

These patients can be regarded as having been poisoned. The toxin may be exogenous e.g. Carbon monoxide, Tricyclic antidepressants, Narcotics etc. or endogenous arising as a result of organ failure e.g. Diabetic Ketacidosis, Myxoedema coma, Respiratory failure. As such the most useful tests are arterial blood gas analysis, serum anion gap and serum electrolytes

Alcohol can cause coma in a number of direct and indirect ways. Acute intoxication will cause coma; the amount required depending on the patients tolerance to alcohol. Acute withdrawl can lead to delirium and seizures. Following a seizure the patient may be comatose. Head injuries sustained as a result of intoxication can cause coma and the chronic alcoholic is particularly susceptible as long term alcohol abuse impairs clotting and causes cerebral atrophy with a consequent increased risk of sub-dural haemorrhage.

Following the above focused examination coma patients can be assigned to one of four groups which then guides further assessment, investigation and management

C = Small extradural haematoma and frontal lobe neoplasm. Although there is a left temporal extradural haematoma if the patient is fully conscious it may not be sufficiently large to warrant evacuation. The confounding factor is the presence of the right frontal lesion which is either a primary cerebral neoplasm or solitary metastasis.

D = Large metastasis.. This scan shows a neoplastic lesion in the right temporal lobe. Thi may be a primary or secondary lesion and surgical intervention may or may not be appropriate

E = Intracerebral bleed. This scan shows an intracerebral haemorrhage. There is no evidence that surgical evacuation of such heamorrhages improves outcome.

The necessity of treating hypoxia and hypotension to prevent further neurological damage has already been stated. All coma patients should receive 15 l/min O2 via a well fitting non re-breath mask. Urgent blood gas analysis will allow determination of the following:-

All of which can cause coma or occur as a result of coma.
Further analysis of those patients with a metabolic acidosis will enable calculation of the anion gap which will indicate probable causes for the coma .
A serum lactate is helpful in establishing the presence and degree of tissue hypo-perfusion and is particularly useful as a marker in sepsis
Patients suspected of having taken an overdoes of benzodiazepenes or opiates should be given flumazenil and naloxone respectively
Wernickes encephalopathy is a rare cause of coma, however indiscriminate infusion of glucose in (thiamine deficient) alcoholics can precipitate further acute neurological damage. In consequence all malnourished and alcoholic patients in coma should receive 100 mg thiamine slowly over 5 minutes prior to the administration of glucose.

In cases of non-traumatic coma the attending doctor should consider specific treatment with naloxone, flumazenil, thiamine and glucose

The prognosis of patients in coma is related principally to the direct cause of the coma. The 3 main CNS causes of death are:-

Two other prognostic determinants have been identified including

For patients and their relatives and friends the outcome to be wished for is at least a moderate to good recovery. Overall only 15 % of patients in non-traumatic coma lasting more than 6 hrs will make such a recovery. This figure rises to 35% in patients whose coma is due to infection, organ failure and biochemical derangement and falls to 11% in patients whose coma is due to hypoxic injury. The outcome following a cerebrovascular insult is even worse with only 7% likely to achieve a moderate to good recovery.
One particularly unfortunate group of patients are those who have suffered an hypoxic brain injury. 20% will enter a persistent vegetative state as hypoxia is particularly likely to cause irreversible bi-hemispheric damage with relative sparing of the brainstem.
The outcome of coma following trauma is significantly better. Of those with a GCS of 8 or less 35 % had a good recovery at one month.

Those patients not opening their eyes in response to pain after 6hrs of coma have only a 10% chance of making a moderate to good recovery compared to 20% of those whose eyes do open to pain. In those who remain in coma for 1 week only 3% will make a good recovery

In a prospective study by Levey et al of 500 patients in coma death occurred in all those with absent corneal reflexes or absent pupillary response to light at 24 hrs.
Key learning point
The Prognosis of a patient in coma is determined primarily by the cause of the coma.

The Differential diagnosis of any patient presenting with coma of unknown cause must include patients who have the locked in syndrome and those who are malingering.

1. Locked in Syndrome. In this syndrome, an acute pontine lesion causes paralysis of all 4 limbs and the head and neck including the facial muscles. The patient is however conscious (the reticular activating formation is intact) and they are able to blink and move their eyes because the oculomotor pathways are spared. It is essential therefore, before a painful stimulus is applied, to ask the patient to blink and move their eyes up and down.

2. Malingering. Patients who are malingering may or may not be initially convincing. Often the history raises some suspicion, similarly the neurological findings are contradictory or inconsistent. It is however a diagnosis initially of exclusion. Normally the condition lasts only a day or so; there is a charachteristic sudden awakening and associated retrograde amnesia.

3. CVE. Most patient s who have had a CVE do not present in coma. Other causes should be sought.

MedicoLegal and other considerations: