The temperate climate of the UK means that severe hypothermia leading to cardiovascular instability and cardiac arrest is rare. Despite this it is important to understand the patho-physiology and treatment of this emergency as the prognosis, particularly in the young and previously healthy can be remarkably good. Achieving a good outcome requires aggressive and prolonged input from a multi-disciplinary team.

The human body has evolved to work within a narrow, carefully maintained, core temperature range. As hypothermia develops, many organ systems stop working properly. The physiological effects of hypothermia mean that the management of cardiac arrest requires an altered approach. Remember, too, that hypothermia can be protective greatly prolonged resuscitation efforts may be justified.

Hypothermia is defined as a core temperature below 35 C, with mild hypothermia classified as 32-35 C, moderate 30-32 C and severe disease below 30 C [1]. It is frequently associated with submersion injury and drowning (see forthcoming session).

Two groups of patients seen are winter sports and wilderness enthusiasts and urban poor. Factors contributing to the latter group include alcohol, drugs, malnutrition and poor socioeconomic conditions [2]. Deaths in the UK are rare and occur predominantly in the elderly, more often in women than men [3]. However,in 2017 there were 34 deaths in Scotland that involved hypothermia

This CEMPaedia article concentrates on patients with actual or impending cardiopulmonary arrest. The treatment of mild-moderate hypothermia and localised cold injuries are dealt with in the article on Hypothermia & Frostbite.

Body temperature is normally tightly regulated but is less well-controlled in the very young, and impaired by age, disease, injury and alcohol/drugs.
As the body cools, the metabolic rate falls and neural transmission is inhibited [4]. Multiple derangements occur including:

All of these reduce tissue oxygenation [5].

Intravascular volume falls due to cold diuresis and fluid shifts into the extravascular space.

Note that malignant arrhythmias are unlikely to be hypothermia-induced at temperatures above 32 C consider alternative causes such as acute coronary syndrome (ACS).

You’re not dead until you’re warm and dead.

It is important to note that these survivors are usually young fit individuals.

As with any critically ill patient, assessment and management will occur simultaneously and follow an ABC approach.

In determining whether hypothermia is playing a significant role in your patients presentation consider:

It is important (but difficult) to try to decide whether hypothermia is the primary problem or secondary to another pathology. If they are simply cold because they have been lying in a cold environment following a cardiac arrest from another cause it is doubtful aggressive treatment of hypothermia is going to make much difference.

You are dead if you’re cold because you’re dead

Getting as much information as possible about the circumstances is essential.

Furthermore it is important to bear in mind that while hypothermic arrest is survivable, being frozen is not. If the body is frozen (for example the chest is so stiff that cardiopulmonary resuscitation (CPR) cannot be carried out or there is ice in the pharynx) resuscitation attempts are futile [10].

Hypothermia can cause a low volume low pressure cardiac output with a blood pressure un-recordable by non-invasive techniques [1]. To avoid missing a weak pulse, standard advanced life support (ALS) technique is modified, in that the pulse check should last 1 minute. There is a role for invasive monitoring and non-invasive Doppler or ultrasound techniques in assessing cardiac output but do not let prolonged attempts stop CPR.

If there is any doubt about finding a pulse, start CPR as for a normothermic patient.

Knowledge of core temperature confirms the diagnosis, directs future therapy and assesses the effectiveness of re-warming. Skin surface temperature measurement is of no use. Different sites of measurement may give different temperature readings and imply differing rates of re-warming so it is sensible to select one site and use it consistently. The rectal thermometer may lag behind the core temperature increases due to impaction into frozen faeces. The oesophageal temperature reading may be falsely elevated when concurrent heated, humidified oxygen is being administered. For these reasons, oesophageal or vascular temperature probes are recommended [4].

Blood gas analysis can cause some confusion in hypothermia. Blood gas machines will warm the sample to 37 C and report those values. In vivo, the values will be different partly because of the increased solubility of gases as the temperature of a liquid falls.

It is possible to mathematically correct the values to the patients actual body temperature but interpretation of these values is very difficult partly because we have little idea of what the normal values for hypothermia should be.

To avoid confusion and ensure consistency use the uncorrected values: that is the values the machine reports after warming the blood to the standard 37 C.

Once cardiac arrest is confirmed:

Defibrillation is less effective in hypothermia. For ventricular fibrillation/ventricular tachycardia (VF/VT) defibrillation may be tried up to three times but is then not tried until the temperature reaches 30 C.

Pacing is generally ineffective. Do not try it unless bradycardia persists when normothermia is reached. Sinus bradycardia may be a physiological response and is not treated specifically.

Normocapnia will be achieved at lower minute volumes than normal and hyperventilation risks cerebral hypoxia through reduction of cerebral blood flow [1-2,4,5]. Aim for a normal CO2 on ABG (not corrected for the patients temperature).

In a patient with a perfusing rhythm, intubation (or other rough handling of the patient) may precipitate VF, although the evidence for this is mainly animal- based and it is rare.

Drugs are often ineffective and will undergo reduced metabolism; so these are withheld below 30 C then given with twice the time interval between doses until either normothermia is approached (35 C) or circulation restored. So, adrenaline would be given about every 8-10 minutes once the core temperature is above 30 C.

Re-warming can be passive or active (internal or external). In a patient with a perfusing rhythm, passive measures may be sufficient.

Passive measures will only achieve rewarming in a patient with effective circulation.

In patients in cardiac arrest, active internal re-warming is mandatory. The therapeutic manoeuvre of choice is cardiopulmonary bypass (CPB) [4,5]. This may be instituted using femoro-femoral or aortic-right atrial bypass. The former is more suited to the emergency department (ED) environment as it is easier and faster to establish and prevents further heat loss, which will result from opening the chest [5]. If femoro-femoral bypass is established, chest compressions should generally be continued to ensure acceptable flow through the cardio-pulmonary circulation.

Temperature increases of 1-2 C every 5 minutes may be achieved. Bypass should be instituted for patients in cardiac arrest, patients with haemodynamic instability and a core temperature below 32 C, frozen extremities and rhabdomyolysis with hyperkalaemia [5].

Note the size of the cardiopulmonary bypass equipment in Fig 1. It may be easier to take the patient to theatre than the machine to Resus. 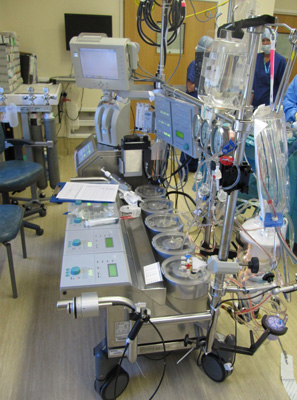 CPB simply will not be available to a lot of departments. If it is not an option (or while you are waiting for CPB) you should:

If you get a return of spontaneous circulation (ROSC), the ERC guidelines suggest following standard post-resuscitation care

The act of re-warming may precipitate cardiovascular collapse (re-warming shock) and rhythm change. The reasons are not completely understood but include electrolyte shifts, temperature fluctuation, intravascular depletion and drug therapy [4]. This will, of course, not be an issue if bypass is used to re-warm. Patients should be adequately volume loaded to maximise cardiac output during the re-warming process. In the absence of cardiac output monitoring aim for a central venous pressure (CVP) of 8-12 cm H2O.

With CPB, survival rates in arrested patients approach 50%, even with a time to put bypass in place of around an hour [2,11,12]. The best figures are obtained from units dealing with cold mountain regions, as the population in question are younger and fitter than the urban population which typify the UK case mix. However, reasonable figures have also been reported from urban populations [12].

Patients with a potassium level over 10 mmol/L or severe traumatic injuries will not benefit from bypass. Similarly, patients with pre-existing cardiopulmonary, renal or neurological disorders require careful selection as they have a poorer prognosis [4,5].

In primary hypothermic cardiac arrest, death should not be confirmed until: