Commonly, not much is known about transient synovitis (TS), and for many ED clinicians, it is a diagnosis of exclusion, as when a patient presenting with hip pain typical of TS will be suspected to have septic arthritis, until proven otherwise. That is of course, the safe approach. But what exactly is TS?
TS is a self-limiting synovial inflammation of the hip that occurs in childhood (there are only about three reported cases in adulthood in the literature). It is relatively common, with an average annual incidence of 0.2% of the general population. There is a male-to-female ratio of slightly more than 2:1. The disease typically presents at a mean age of 6 (38) years.

Yes we know all that, I hear you telling me. But what exactly causes TS? The truth is – we dont really know.

There are theories of an autoimmune or post-traumatic process, but there is little proof behind them. Five main research papers support a link with viral infection – two studies measured immunological parameters and three investigated clinical evidence of a preceding viral illness. However, there is much doubt on this hypothesis, and I will tell you why. First lets talk about the studies supporting this: Early work by Leibowitz et al., and later by Tolat et al. found that patients with TS have a higher serum interferon concentration and are more likely to be in an antiviral state compared with controls.

A few years later Landin et al. further supported this hypothesis when they noted a seasonal variation in the incidence of TS, with more cases presenting in October and fewer cases in February. Kastrissianakis and Beattie, raised the suspicion further when they found that TS patients are more likely to have preceding viral symptoms. In another paper, Fisher and Beattie found a preceding illness in 40% of patients with TS. However, studies attempting to single out viral pathogens, which would not only help diagnosis, but also prevention, have not been successful. If youre a bit of a sceptic, this fact alone will already begin to raise an eyebrow. However, one can argue that although the viral culprit hasnt been found, that doesnt mean they didnt do it. So others have taken on the debate from different angles. For example, in work published this year, Harrison et al. argue that the finding of raised interferon levels is not universal, nor specific to a virus, and is not made in comparison with a well-formed control group.

Clinical questions of viral illness are flawed by recall bias, they say, and the strongest evidence to support the viral association is the ecological evidence of an association between TS and seasonality. Harrisons well-powered study, which looked at the epidemiology of TS in my hometown- Liverpool, found no seasonal association. Interestingly though, these authors found a link with deprivation in Merseyside, however, this may be due to referral bias and further attempts to replicate this in other settings are needed. Ok FINE. So we dont know what causes it. But how do we differentiate it from other hip pathology? As outlined already, the diagnosis is mainly one of exclusion. Several evidence-based algorithms have been presented for the limping child, mainly to ensure that emergencies or more serious diseases (like osteomyelitis, septic arthritis, orthopaedic oncological lesions, Perthes disease and SUFE) are not over-looked.

There is likely to be one in your ED. I am attaching an algorithm adapted from evidence available online. It is not exhaustive but relevant to TS. Other, less common differentials include Lyme arthritis, pyogenic sacroiliitis, and juvenile rheumatoid arthritis.

Septic arthritis, non-accidental injury and malignancy should always be at the back of your mind in a child presenting with a limp. In TS the child will typically present with an atraumatic limp, with acute groin or thigh pain. Characteristically there is limited ROM of the hip caused by reactive effusion, leading to a position of the hip in flexion, abduction and external rotation. Weight bearing may be difficult. Some cases are bilateral. As already discussed, some may argue that some histories may be prevalent, including URTI, gastrointestinal upset, UTI or minor trauma. Investigation: Diagnosis is complicated by the absence of specific laboratory markers, negative laboratory tests, normal xray, as well as the fact that pain originating from the knee or lumbar spine must be excluded. Kochers criteria helps predict a septic arthritis probability with the basis of one, two, three, and four predictors being 3.0, 40.0, 93.1, and 99.6%, respectively.

CRP>20 mg/L was later added to this algorithm with Caird et al. finding the predicted probabilities of three, four, and five factors to be 83, 93, and 98%, respectively. Once suspected, ultrasound is considered to be the best, non-invasive technique for detection of a hip effusion- but, apart from being operator dependant it cannot differentiate between the different causes for the effusion. It should be performed early. There is some debate on a decision to aspirate if an effusion is seen, given the potential catastrophic consequences of forgoing treatment. If an effusion is present, and there are criteria to suspect infection, as described above, then orthopaedic referral for consideration of arthrotomy/washout is required.

In a study by Skinner et al., children with an atraumatic limp and no criteria to suspect infection, (and a negative x ray in those who were nine years or older for exclusion of Perthes disease) underwent urgent US and those with hip joint effusions were termed as having TS and were managed in the ED as outpatients. Parents were given advice for the children to rest, be given paracetamol and to return if the child had a fever or if symptoms worsened. Patients were reviewed at 7 days with repeat clinical examination and USS and if symptoms or the effusion persisted, they were again given a 7-day follow-up.

The results were good and no cases of septic arthritis were missed.

The utilization of MRI may be considered in patients with equivocal clinical presentation and US results as this may be able to differentiate between TS and septic arthritis. However, MRI facilities are not always readily accessible and they frequently require the administration of a general anaesthetic. Treatment TS is self-limiting and resolves spontaneously. It is managed conservatively through observation and by encouraging rest. Parents should also be given advice to return if symptoms worsen or if a fever develops. The addition of NSAIDs has been studied by Kermond et al., who found that ibuprofen reduced the average number of days with symptoms from 4.5 days in the placebo group to 2 days in those administered ibuprofen 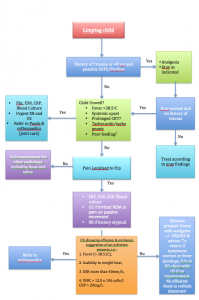 About the author: Nikki (a.k.a. Nikola) Abela is a CT3 Emergency Medicine trainee in Mersey. She has a special interest in Paediatric Emergency Medicine and is studying for a Masters Degree in PEM with the University of Edinburgh. Some of the work published here is adapted from her studies.