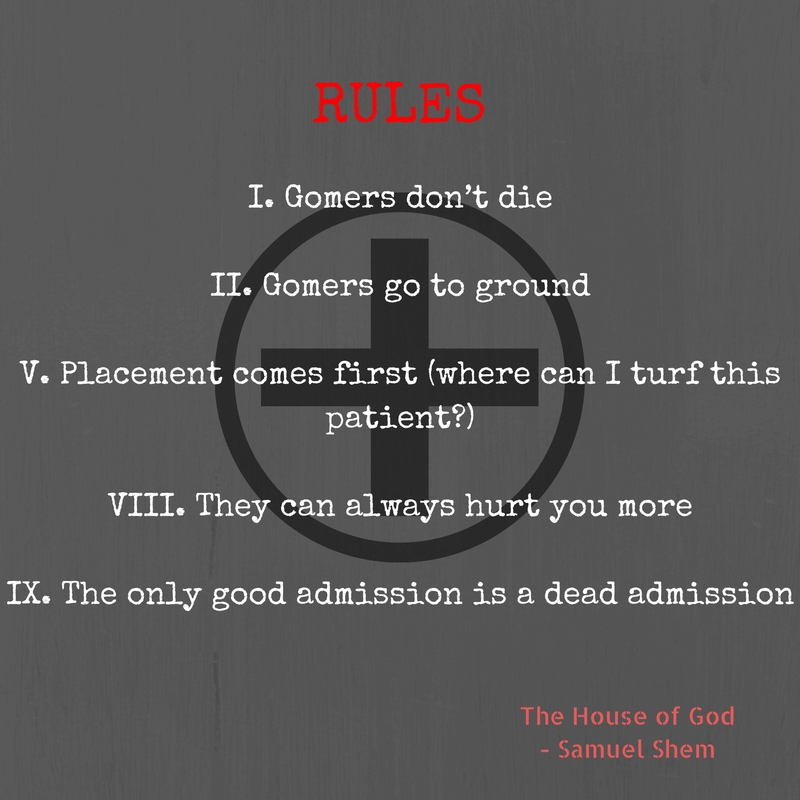 Adapted from the book “The House of God” by Samuel Shem

When I first read Samuel Shem’s book as an idealistic medical student, I couldnt get to grips with its dark humour. I regarded it as a work of fiction, not realising that after a few short years in the Emergency Department, I would read it again with a wry smile, understanding so much more of the unspoken culture of Medicine.

In an era of increasing bureaucracy, never ending targets, and spiralling demand on a background of chronic underfunding, the prevailing cynicism of the medical profession might be understood. The pressure in the Emergency Department is immense. Sadly, our trainees are increasingly burning out, switching to a less demanding specialty or even leaving the NHS altogether for a better life overseas.

It would be easy to blame our cynicism on this toxic environment. However, a measurable decline in empathy over the course of medical training has been observed for some time, in several countries, across different specialties and contrasting health systems.

One would expect, or at least hope, that candidates applying to study medicine have a higher baseline empathy than the general population. So why is it that this fundamental drive to help people, which to many was the primary motivation in becoming a doctor, erodes so significantly over time? And why is it, that emergency medicine in particular, is so affected?

When and why does empathy start to decline?

Many studies have shown that a significant decline in empathy occurs during the latter stages of medical school, foundation years, and early years of specialty training, although this finding has not been without challenge.2 Sadly it seems the downward trend continues throughout training and levels of empathy never recover. Higher levels of empathy have been found in women,3 4 5 6 and those with greater empathy are more likely to enter psychiatry, paediatrics, GP and O&G as opposed to surgery, anaesthetics, or emergency medicine.6 7 8 9 10

Many theories have been put forward to explain exactly why doctors appear to become more cynical and less empathic the longer they practice medicine. The tipping point appears to be at the stage in their training where students are first exposed to clinical medicine. Studies point to external factors, arguing that students under the increasing pressure of continual assessment and tough exams, begin to lose sight of the real focus of medicine- their patients.11 Similarly in a culture of increasing bureaucracy, this theory could be extended to doctors. When our attention is diverted from patients in order to hit targets, adhere to protocol, and complete documentation that is becoming increasingly defensive in nature, what time is left for empathy?

There may be some truth in the argument that junior doctors seem to quickly become disillusioned and lose their idealism on exposure to clinical practice.12 The dream promised to us by Greys Anatomy and ER is quickly disbanded. We were promised George Clooney. Now the man who stirs up most emotion in us is Jeremy Hunt.

Im not saying this is necessarily a bad thing, but the profession is very different now to the one that many signed up for at the age of 18.

Researchers have also recognized increasing financial pressures on medical professionals. Increasing tuition fees, the cost of postgraduate exams and professional fees in a time of austerity all contribute to this effect.12 We are also feeling the pressure of a rising culture of litigation and thus many have begun to practice defensive medicine. Willing to bet your GMC number that the post-coital headache with a barn-door normal CT isnt a subarachnoid haemorrhage? Better refer to medics for an LP.

So could this phenomenon be entirely explained by stress, stress, and more stress? Certainly many studies have shown that fatigue and chronic sleep deprivation are strongly correlated with a fall in empathy, as are high levels of anxiety, depression and burnout.13 14 15 We know that burnout is particularly prevalent in acute specialties with intense rotas, including emergency and intensive care medicine, and that we have a problem retaining our higher trainees for this reason, with doctors and nurses chopping and changing shifts, you almost never work with the same team twice. This depersonalisation and lack of social support have been shown to be associated with a decline in empathy.14 16 17 18

Could the ubiquitously hated junior doctor A&E rota explain why our specialty is disproportionately affected by loss of empathy?

Perhaps. But there may be other factors at play, and some of the blame may lie at our door. Many papers have put forward the idea that cynicism is a learnt behaviour and a product of the prevailing medical culture. Some of this may be down to the hierarchy of medicine, which is now perhaps more diluted than 20 years ago. Do we teach our juniors to become cynical of frequent flyers when we sigh on picking up their card? Do they see a less-than-empathic reaction to back-to-back pseudoseizures?

On the flip side, Ive been privileged to witness some truly incredible seniors navigate their way through those most difficult of conversations in the ED. Ive watched a consultant tell loving parents their child has died, and have no time for a breather and a cup of tea before the next trauma call comes in. Ive watched someone tell a wife that their 40 year old husband would never wake from his subdural, and immediately run a cardiac arrest, with steady hands and a clear head.

Could it be that under all that pressure, doctors really do care too much and are just trying to protect themselves from feeling..well.. everything?

Does one need to build up resilience and learn to protect themselves against feeling the full gravity of the situation, in order to lead a paediatric cardiac arrest effectively?

Is it therefore true, that in order to practice Emergency Medicine we must harden up and learn from our seniors how maintain an air of detachment? Has empathy been lost in the pursuit of objectivity?12

This is recognized amongst medical professionals as emotional blunting13 and perhaps there is some truth in the argument that this is all about self-preservation.

Is there any hope?

Are we all doomed to have the Emergency Department leech every last morsel of empathy out of us? Maybe. Many interventions have been employed by medical schools and training programmes to try and teach empathy.22 Methods range from use of creative arts, to blogging, to communication skills training and patient interviewing. These methods were met with varying levels of success, but to my knowledge, no intervention has yet been shown to maintain sustained levels of empathy or protect against future decline.

So what can you do about it?

The first thing is recognizing it. The importance of taking a break, making sure you are well rested, fed and watered has been impressed on us of late as strategies for preventing burn out, but are also crucial in maintaining empathy. Have a look and listen to the St Emlyns team discussing well-being here.

Secondly, the importance of providing an empathic role model, is paramount.

As for blogging, well, thats up to you.